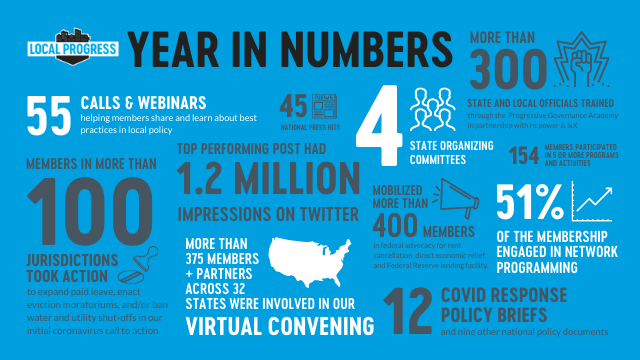 It’s hard to describe exactly what 2020 has been. What we know for sure is that Local Progress members have been the decisive leaders we needed at every turn.

As a network, we have grown and our collective work has helped push the progressive policies that our communities want and need to thrive. Here’s a look back on some of the boldest, most exciting work that happened across the Local Progress network this year:

RESPONDING TO COVID-19 & BUILDING TOWARDS A JUST RECOVERY

Localities Extend Eviction Protections and Push to #CancelRent. Four months into the global pandemic that has exacerbated our national housing crisis, Local Progress members continue to ensure people can stay safely in their homes. San Francisco extended one of the most powerful eviction moratoriums in the country, Philadelphia passed five bills in the Emergency Housing Protect Act, and Ithaca is looking to cancel unpaid rent altogether. Read more →

Local and State Governments have Marshalled $9.27 Billion for Small Business Relief. A new report by the Institute of Local Self-Resilience has found that cities, counties, states, and community organizations have established more than 800 programs to provide financial assistance to small businesses in the wake of the pandemic. These programs have deployed more than $9.27 billion in grants and loans and have filled critical gaps in federal aid. Read the report →

State and local officials call on the Fed to provide zero interest loans during the pandemic. In an op-Ed, Chicago Ald. Rossana Rodriguez joins her county and state colleagues in calling on the Federal Reserve to grant zero-interest loans to state and local governments. Action Center of Race and the Economy (ACRE) estimates doing so would save $160 billion per year. Read more →

Local Progress Called on Congress to Pass State & Local Aid. As Congress negotiated the recent COVID relief package, it became clear that state and local funding was at risk of being cut. In a letter sent to over 100 members of the Congressional leadership and their offices, dozens of LP members added their testimonies in a letter sent to  Read more →

More and More Localities Move to Reimagine Public Safety. In the wake of George Floyd and Breonna Taylor’s murders, public demand for change has created unprecedented public and political will to think bolder and reimagine what public safety looks like beyond policing. Now, nearly two dozen localities – led by Local Progress members – are taking new steps to divest from police and invest in community needs. Read more →

Berkeley to Become First in the Nation to Remove Police from Traffic Enforcement. The murders of Philando Castile, Sandra Bland, and so many others all started from traffic stops. As cities and towns across the country look to reimagine public safety, Berkeley’s decision to remove police from traffic stops – introduced by Councilmember and Local Progress member Rigel Robinson – serves as a national model. Read more →

Seattle City Council Reaffirmed Commitment to Reimagine Public Safety. The Seattle City Council voted 7-2 to override the mayor’s vetoes of adjustments to this year’s budget, preserving $17 million for community safety programs, $3 million for participatory budgeting, and budget provisos intended to trim 100 positions from the police department that the council approved in August. “We cannot look away from this and we can no longer accept the status quo if we truly believe that Black lives matter,” said Council President M. Lorena González. Read more →

Austin City Council Approved $150 Million in Police Budget Cuts. Led by City Councilmember and LP Board Member Greg Casar, the council unanimously approved a $4.2 billion budget that includes about $150 million in cuts to Austin police – approximately a third of the police department’s budget – to be reinvested to community needs and other city departments. Read more →

Milwaukee Action on Mail-in Ballots Leads to Statewide Adoption. In April, the Milwaukee City Council unanimously voted to send absentee ballot applications and pre-paid return envelopes to the city’s 300,000 registered voters. The local reform has now inspired state officials to do the same statewide. The significance of this cannot be understated. Learn more about local electeds can protect and empower voters during COVID-19 →

Harris County, TX to Provide $2.5 Million for Immigrant Defense Fund. The Harris County Commissioners Court approved more than $2 million over the next two years to provide legal services for undocumented immigrants residing in the county who face deportation. Judge Lina Hidalgo explained that immigrants without an attorney are deported at rates of 90 percent while those with an attorney are only deported approximately 5 percent of the time. Read more →

The Seattle City Council passed a new tax on big businesses Monday that’s expected to fund economic relief and core services during the coronavirus crisis and raise more than $200 million per year for housing, local business assistance and community development in the long term.  Read more →

St. Paul Moves to Pilot Guaranteed Income Program. Mayor Melvin Carter signed an executive order establishing the People’s Prosperity Guaranteed Income Pilot, which will provide $500 monthly cash payments to randomly selected families in four ZIP codes. The program, which was unanimously approved by the St. Paul City Council, will be paid for with federal CARES Act and philanthropic dollars. It is shaped after an initiative in Stockton, which has been giving 125 residents $500 per month since 2019. Read more →

The Balsz Elementary School District in east Phoenix Will Use The 1619 Project in School. Thanks to the leadership of LP Member and Governing President Channel Powe, the school district kicked off its professional development program for its educators dedicated to The 1619 Project and an associated curriculum. Read more →