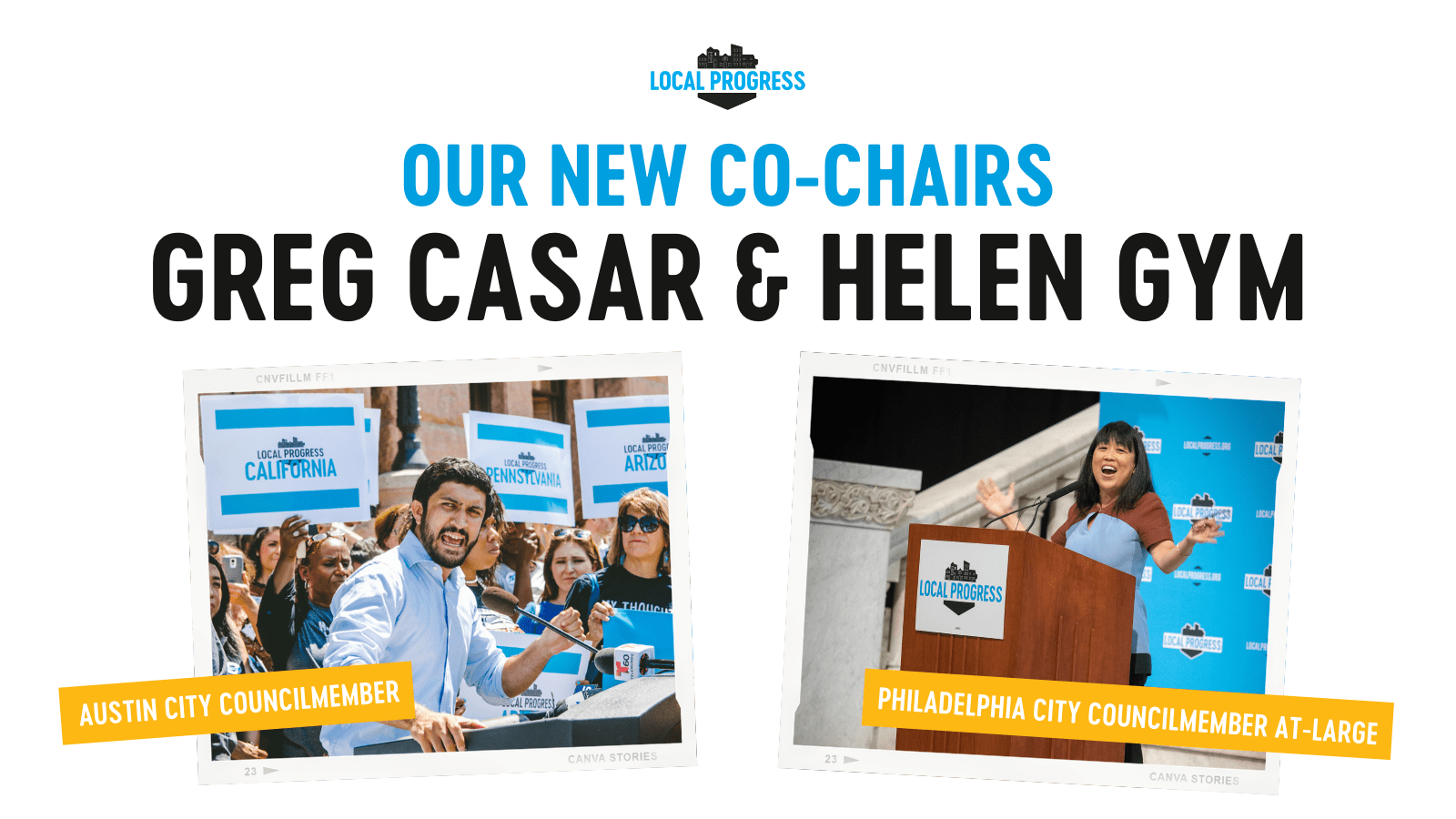 Today, Local Progress is excited to announce its new board leadership. Austin Councilmember Greg Casar and Philadelphia Councilmember At-Large Helen Gym will serve as co-chairs of the network’s board starting January 1, 2021. They succeed New York City Councilmember Brad Lander, a founding member of the organization who has served as board chair since 2016.

“We are thrilled and honored to be serving at the helm of this powerful network of local elected officials. This year has reminded us how important it is to exercise the most courageous leadership possible. As we prepare to step forward together into a new year with the same challenges, we know that our cities and municipalities must continue to be the epicenter of progressive change in this country. By working together, we can drive transformative change across all levels of local government, build power with our communities, and impact policy and governance at the state and national level. Together, we are redefining what is possible. This is what Local Progress is all about.”

Councilmember Casar is a native Texan, the son of Mexican immigrants, a community organizer, and an Austin City Council Member representing District 4 for his third term. First elected in 2014, Greg is the youngest City Council Member in Austin’s history and serves as District 4’s first-ever direct representative. He has a proven track record of fighting for a fair and safe city for all Austinites. Greg championed paid-sick-days, led the effort to successfully pass the largest affordable housing bond in Texas history, and redirected City budget resources to more effectively address the needs of everyday Austinites.

Councilmember Gym has served on the Philadelphia City Council since 2016, leading a human rights agenda which measures outcomes based on the health and well-being of young people in the city. She is the daughter of Korean immigrants and is the first Asian American woman on Philadelphia’s City Council. She leads a public schools agenda that contributed to the end of the 17-year state takeover of the Philadelphia school system. She established a mandatory pre-filing diversion program and the city’s first legal defense fund for tenants facing eviction. Her legislative efforts also advance economic justice, including establishing a permanent Office of Labor and Worker Protections and passing laws guaranteeing advance scheduling and a right to return for the hospitality and service sectors.