SB14 is the Latest Attempt to Take Power Away from Texans 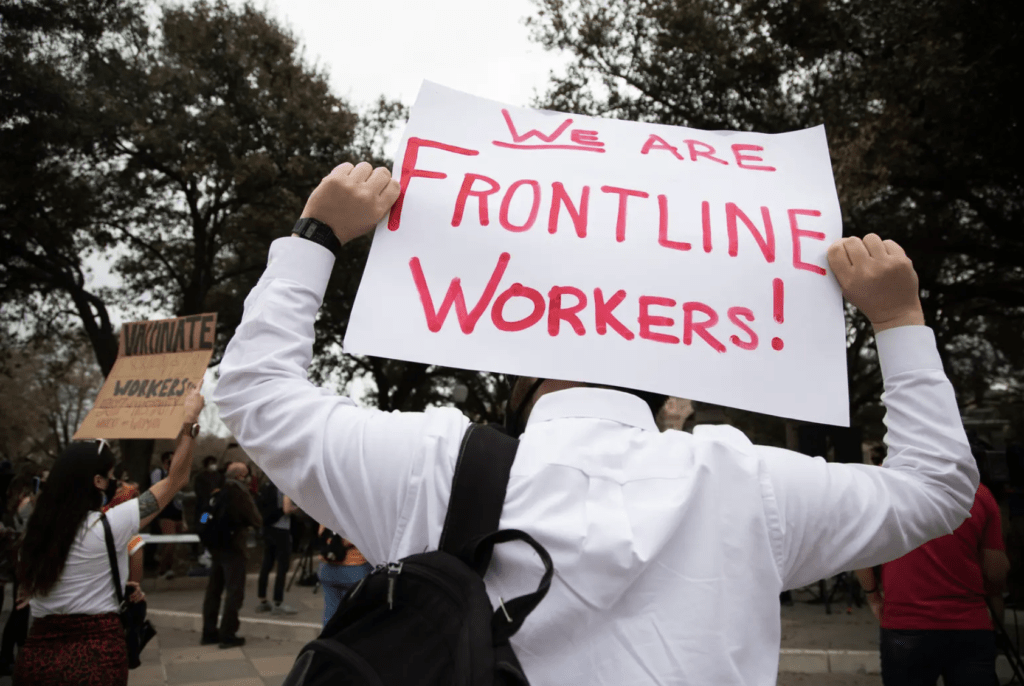 Once again, some state legislators in Austin are wasting taxpayers’ time and money by focusing on issues that don’t strengthen or unite Texans, but serve only to divide us, excite their increasingly small base, and take power away from people and communities. The last few legislative sessions have been dominated by a concerted effort to focus on issues that don’t actually address problems our state is facing – problems that manifested painfully for all of us when our very own electric grid collapsed a few months ago. Instead, they’re pushing through legislation that only harms Texans – especially Black and brown workers, immigrants, workers in low-wage industries, and LGBTQ people.

But the lengths some lawmakers are going to this year to undermine the decision-making abilities of local communities is truly staggering. Look no further than SB14, a bill that would preempt any local ordinances that aim to protect employees. We have already experienced the harms of this type of preemption here in Dallas – we passed our earned paid sick leave protections nearly two years ago and actually had the law on the books for a few months, only to see our local control undermined. Our earned paid sick leave measure was voided – just as the COVID pandemic took grip. If that ordinance had been allowed to remain in effect, we would have had a more resilient and healthier workforce better positioned to weather the dual public health and economic crises that roiled the nation.

Those of us who worked on the earned paid sick leave ordinance, live and work in our surrounding communities; we’re elected by and accountable to our neighbors, and we understand the unique policy solutions that are necessary to tackle our region’s unique challenges. SB14 would mean that communities like ours are banned from enacting measures that would raise the quality of life for local workers. It would undermine municipal employment policies like paid sick leave and wage floors; and it also would preempt local non-discrimination ordinances, fair chance hiring policies, water breaks for construction workers, and salary history inquiry bans.

What’s particularly sickening about the actions of our state lawmakers right now is that they’re doubling down on their anti-local government agenda in the wake of a historic pandemic, a hobbled economy, a year of reckoning over white supremacy and police violence, and the disastrous ERCOT infrastructure failure. While local communities continue to rise to the many challenges of this moment, and answer with innovative and locally tailored policies that protect the health and well-being of all residents; lawmakers in Austin are taking a different approach – hoard power, disregard local democracy, and threaten those who disagree with you with punitive measures.

Republicans in Texas used to support local democracy, supposedly. What’s changed? Well, consider the groups most impacted by the state legislature’s latest power plays this session: Black and brown communities, tansgender kids, immigrants and low-wage workers. Indeed, lawmakers in Austin aren’t limiting their preemption efforts to SB14 – they’ve advanced preemption on a host of other issues that disproportionately harm some communities more than others. Most recently, lawmakers have passed efforts aimed at penalizing cities that even attempt to make decisions about the budgets of local police departments.

I’m proud of how our local leaders continually work together to strengthen our neighborhoods. Together, we’ve created welcoming spaces for families, strengthened our local infrastructure while also protecting our environment, and protected the health and well-being of community members. When we have the flexibility and authority to work together locally to address local challenges, we all win.

One way to better define and protect this authority is by updating home rule, the long-standing legal principle that affirms cities have the power to act on the unique needs and values of their communities. Advocates and elected officials already have a clear roadmap for how this could be done.

Omar Narvaez has represented Dallas’ District 6 on the city council for four years. He serves as the Chair of the city’s Environment and Sustainability Committee and is a member of Local Progress.