Standing in solidarity with Buffalo, NY

The shooting last weekend at the Tops Friendly Market turned my world upside down.

A white supremacist invaded our city and killed 10 people in a murderous rampage that was rooted in and emflamed by white supremacy and anti-Blackness. 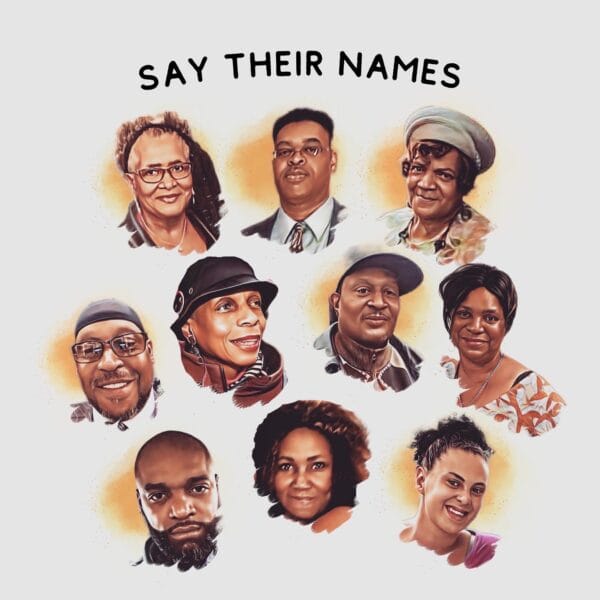 Visual tribute dedicate to the victims in Buffalo by Jen White-Johnson.

This event has shaken me and my community to its very core. My heart goes out to the

familes of those who were brutally murdered while picking up groceries for their Sunday dinners and birthday cakes for their children.

Please support the Buffalo Community by donating to any of these verified charities.

Mass shootings have become commonplace events in the United State. But the s

hooting in Buffalo wasn’t just a mass shooting, this was a cold, calculated attack on Black people by an avowed white supremacist. Replacement theory is not new. It has deep roots in American history starting more than a century ago. White supremacy was the basis of the founding of the US, from the genocide of Indigenous populations and the enslavement of Black people; Jim Crow, mass incarceration, residential segregation, and exclusionary immigration policies. Today, prominent members of Congress like Elise Stefanik, Matt Gaetz, and Marjorie Taylor Greene have used this rhetoric to agitate and fundraise from their base. Fox News, OAN, and Newsmax propagandists like Tucker Carlson have also utilized this theory to increase ratings and provoke white supremacists to action.

We need to stand up to the forces of white supremacy wherever they are.

At Local Progress, we know that actualizing racial justice means building a truly inclusive multi-racial democracy that extends to all facets of governing — through policies and in the day-to-day work of our institutions.

In Buffalo, we’ve been doing this proactively by supporting and expanding the Buffalo Public Schools Culturally & Linguistically Responsive Initiatives (CLRI), making it one of the most progressive programs in the nation. We have invested in training, curriculum development, and classroom resources. I support the continued growth of CLRI programs, such as the Emancipation Curriculum, Puerto Rican Culture Course, Halal food choices, and Rising Voices Library in elementary classrooms so that students of all races and genders will see themselves in the literature.

Stand with me in confronting white supremacy and help dismantle the systems of institutional racism in your community.