On the Ground in Texas: Insights from El Paso 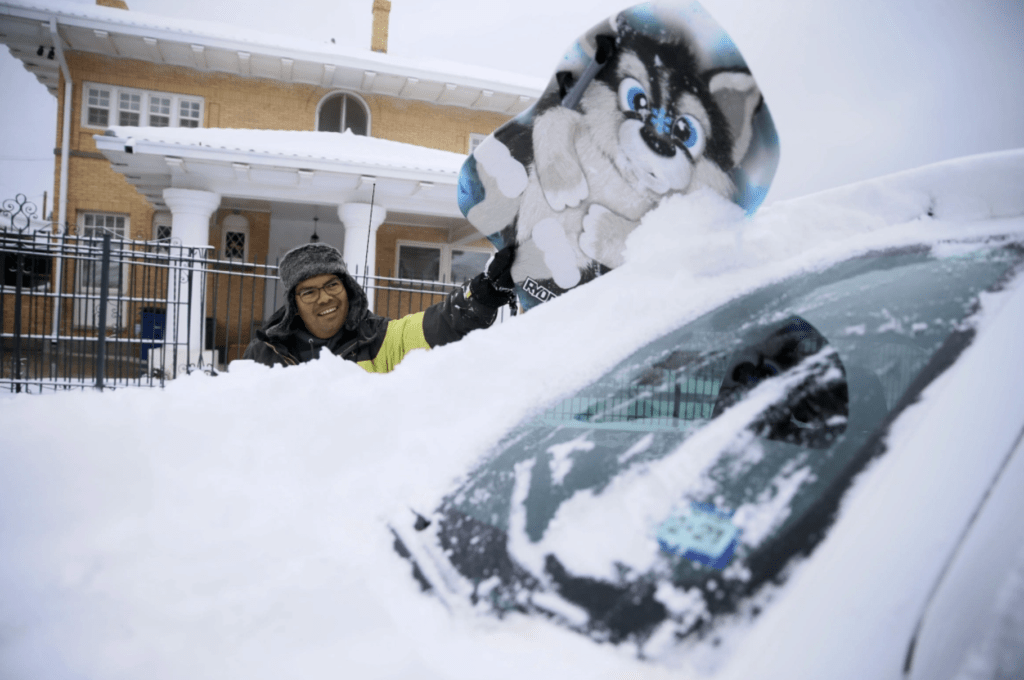 Francisco Sanchez wipes snow off his car with a boogie board before going out sledding with his kids at Memorial Park in El Paso, Texas. (Photo: Briana Sanchez/El Paso Times/USA Today Network via Reuters)

It’s been over a month since winter storm Uri swept across Texas, and hundreds of thousands of residents are still reeling from the crisis. As we wrap up another week at the legislature in Texas, we are disappointed to see that state leaders are choosing to attack voting rights, local worker protections, and even local budget-making processes, instead of answering the needs of Texans affected by this crisis.

Local governments are continuing to help communities recover, and we must make sure these stories are still being heard. We hope that these last months of this legislative session are used to assess needs across our state and make critical changes to our energy infrastructure. We’ve learned a lot from this crisis, and we hope our state legislature takes our lessons and experiences into consideration when making these changes.

In El Paso, our public utility is not overseen by ERCOT, and we were able to avoid the catastrophes seen in other parts of the state because of decisions to weatherize after 2011.

“This winter storm didn’t hit El Paso as severely as it did other parts of the state as far as energy goes,” said El Paso County Commissioner & LPTX Organizing Committee Member David Stout. “Estimates show that a couple of thousand residents lost power, but it was restored within the hour. And that’s because we underwent several preparations after the 2011 storm that devastated our area.”

“We didn’t struggle as much as the rest of the state because we are part of the Western Grid, AND because when a similar event hit us in 2011 regulators worked with El Paso Electric, which made needed upgrades. So this time around, we kept functioning, unlike much of Texas. It was heartbreaking to see what was happening in other parts of the state, and we all wanted to do whatever we could to help.”

El Paso’s public utility is linked to the Western Interconnection grid that reaches fourteen states in the West and parts of Mexico and Canada.

“When we started to experience freezing temperatures, El Paso was able to draw power from the Palo Verde Nuclear Generating Station in Arizona to meet the increasing demand,” said El Paso City Councilmember and LPTX Organizing Committee Member Alexsandra Annello. “This is not the first time that a winter storm like this has hit Texas, in El Paso, or other areas on the ERCOT grid. What happened to our friends and neighbors throughout the state could and should have been avoided. This is a complete failure of our state government, who have yet to assist communities facing the aftermath of this storm. Access to energy should be a human right, and it is time we put the safety of all Texans over profit.”

“What we’re hearing from our friends across the state is that there are apartment complexes and other communities that still don’t have running water. In the weeks after the storm, grocery store shelves were left empty as they tried to catch up with the demand. Now, many are still dealing with damage to their homes from broken pipes and walls damaged from leaking water. Plumbers are in high demand, and many will wait months to get their issues resolved.”

And we’re still living in a pandemic, where many are still out of work and catching up with bills, and maybe those that are still working had to miss a week of wages during the storm. Our Governor has shown that he could care less about the double crises on the ground.”

El Paso spent the years since the 2011 storm going through a series of steps to weatherize its existing facilities so that they could remain functional during extreme cold. All of El Paso Electric’s power plants were ready for extreme cold. A new power plant – Montana Power Station – was built to withstand below freezing temperatures.

“It was clear that our state wasn’t at all worried about another winter storm and took no responsibility when the freeze hit and power started to become scarce,” said Commissioner Stout. Our friends and elected leaders in cities and counties across the state stepped up and worked directly with mutual aid groups and organizers on the ground to reach people in need — networks that have had to be utilized over and over again this past year because our state leadership won’t step up. There was a huge difference in response from local and state leaders. Governor Abbott pointed fingers at ERCOT and anyone but himself, while local leaders hit the ground distributing aid.”

“Our state legislature will be in session for the next couple of months – this is an opportunity to assess the needs of Texans across the state and get aid to local governments and communities suffering from this disaster immediately. Then, our legislature and state leadership should assess what worked and what didn’t – it’s pretty obvious that a deregulated stand alone energy industry isn’t working for the people it’s meant to serve. It’s time for a complete overhaul.”